Footprints from the Classroom

A teacher's adventures around the globe

We drove across the Rwanda-Uganda border in our big yellow truck and eventually, after
stopping at a small market for a lunch of jacket potatoes in cola, honey and ‘surprise’ sauce, we arrived at the Golden Monkey Guest House.

We were briefed on the next few days and then were able to pick from some optional excursions for the rest of the day. I was disappointed that we had not made good enough time to see Dian Fossey’s grave as this was a day’s trek away and was back in Rwanda. We also were unable to go on a trek to see golden monkeys; we would have been able to do this on the last day in Uganda, but Absolute Africa had arranged an early transfer back to Rwanda to suit another traveller. Instead we chose to go canoeing on Lake Mutanda. 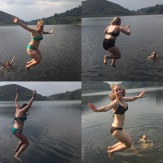 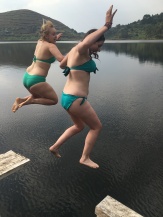 Nikki, Sarah and I were in one canoe, while Vicky was in another with two others from the tour group. They seemed to power their canoe to the other side of the lake in no time, while we snaked our way to not very far at all! Eventually the men in charge rowed out to us and told us how to improve. Nikki, who was at the back needed to seriously adjust her steering skills, while Sarah and I just had to listen to her and paddle hard. I ended up a standing to achieve a stronger stroke and as a team we nailed it in the end! We then went for a swim in the lake. We leapt off a very dodgy diving board and endured the freezing, but very fresh, water. Many photos later and after acquiring many bruises from climbing out of the lake on a ladder even dodgier than the diving board, we got dressed there on the platform and went home. We had an early night after dinner, feeling very ready for the gorilla trek the next morning.

This was a lovely Guest House. The rooms, named after different countries,

were of a good size and very comfortable. The showers were warm and the toilets were clean. They also run a good laundry service. There is a small bar and a large veranda outside which is often host to some stalls set up by locals selling the usual African souvenirs like jewellery, paintings and wooden carvings. They friendly staff were very accommodating and one man offered to take us to the local market, which was an incredible experience. The busy, bustling marketplace was full of food, material and clothes, including the occasional Ugandan football shirt! I would highly recommend going, but not without a trusted local for a guide.

On our last night, some people from the Pygmy village came to perform for us. They played music and danced to their traditional songs as we joined in. This made us very excited for the following morning, where Golden Monkey had arranged for us to go and visit a Ugandan village. Here, we were shown how to prepare a feast, starting from peeling and chopping the vegetables to cooking it over a smoky open fire. We then dressed up and discovered that we’d prepared a wedding feast – mine to be precise! Before I knew it I was ushered into a woven carriage and hoisted above the heads of some local men while the girls danced around me with some men in grass skirts (a bit of a work out, they told me afterwards!). I was then married off to one of the young men in the village. They assured me it wasn’t legally binding… I think! After this we were welcomed into one of the houses to eat the stew we’d cooked and the banana beer we’d brewed. As we left, we were given a gift of beans by one of the hosts. Another unforgettable experience! 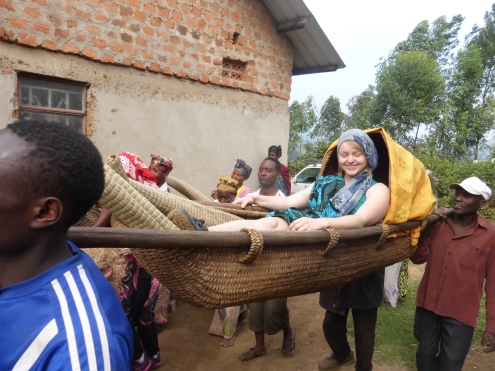 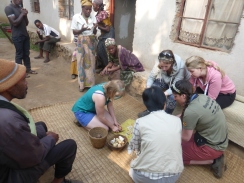 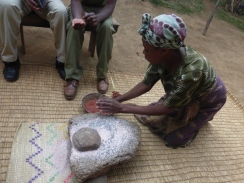 Footprints from the Classroom

Welcome to Footprints from the Classroom, a blog written by Sarah, a teacher who loves to travel. In time, this will be filled with travel tips, photographs and many stories from around the globe.

When Timber Makes One Still

"Everyone needs beauty as well as bread, places to play in and pray in, where nature may heal and give strength to the soul" -John Muir

She travels so that the world may not escape her

What if you spent every day looking for One Beautiful Thing?